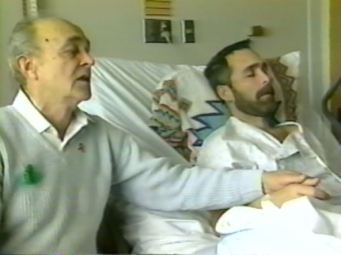 Lawrence (“Lorney”) Dussliere holding his son’s hand while Robb sleeps in the hospital.

Robb was dying in March and early April, 1996. Throughout the year we had been documenting Robb’s life, his parents had been by his side every step of the way.

You might think that this is no big deal. They are the parents. They should be supportive, right?

Unfortunately, many parents abandon their children when HIV and AIDS enter the picture. This is one of the reason Robb worked so hard on the DeLaCerda House during the final months of his life — to help support homeless people living with HIV and AIDS, people who were often homeless because they had lost jobs and had no one left who was willing to take them in.

Lorney and Hattie Dussliere demonstrated the best of human nature during a personal crisis; the protective qualities of parents who understand that love is unconditional.

Robb’s favorite performer was Elton John. As Robb approached death, I began looking for a way to pay tribute to his parents. I listened a lot to Elton John’s great album, “The One.” On that album is “The Last Song.” One day, as I was listening to the CD at home, the lyrics of “The Last Song” became very clear. It was about the love of a father for his AIDS-stricken son.

A father in pain, still able to muster a smile, demonstrating incredible love and support to a son.

This video instantly sprang into my mind, almost fully created. I sat down in my home and cried like a baby. I was doing that more and more over Robb, it seemed.

Even 20 years later, as this blog post is being written, parents still abandon their HIV-positive children. This tribute to Lorney Dussliere is still relevant.

After Robb passed away, Elton John came to perform a concert in the Quad Cities. Lorney and Hattie managed to get a VHS tape of “Robb’s Life” to him. During the concert, as they sat in the crowd, Elton John performed “The Last Song” and dedicated it to the Dussliere family.

I invite you to stop for a moment, listen to the lyrics, and you will understand why Robb’s parents have my undying respect and love.

If you would like to help keep Robb’s legacy alive, please donate — even a few dollars — to the DeLaCerda House. Go to their web page and click on the “Donate” button at the top of the screen.

Catch Up on Recent Posts