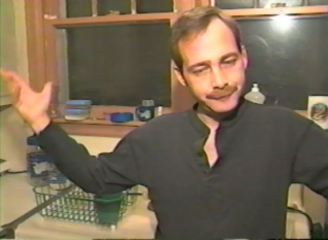 Robb throws his hands in the air, frustrated that he just lost his lunch.

By February 7, 1996, Robb’s body was not tolerating the AIDS drugs he had started during the previous weeks. He was energetic while sitting on the couch, but weak when he engaged in activity.

More troubling was the fact that he was losing a lot of the food he was eating each day.

Despite feeling badly, Robb was still directing the renovation of the shelter for DeLaCerda House, which would provide transitional housing for homeless HIV and AIDS clients in the Quad Cities. Getting the shelter open was Robb’s main mission in life, along with staying alive.

I went over to his house to do our weekly story. Fortunately, his father Lorney was there, and while I was taping, John Brown stopped by.

This is one of the rare times that my voice was heard. When Robb was bending over the sink, I asked what happened. Then I answer when he asks what time it is.

Now that it is 20 years later, and I have had my own serious health issues, I know the feeling of frustration he displays when he throws his hands in the air. At this point, Robb’s body is rebelling, and there is nothing he can do about it.

Catch Up on Recent Posts